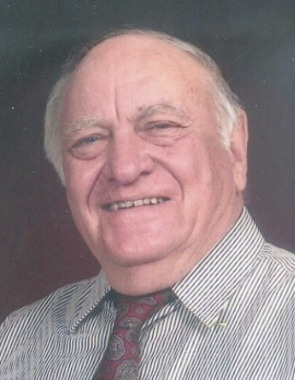 Back to Edward's story

Edward A. "Ed" Henne, Jr., 87, of Shelbyville, IL, passed away at 9:18 a.m. Saturday, December 7, 2019 in Shelbyville Manor.
Private graveside services will be held on Friday, December 13, 2019 in Glenwood Cemetery, Shelbyville, IL with Mitch Ramey officiating and Shelby County Honor Guard presenting the flag. Arrangements are by Howe and Yockey Funeral Home, Shelbyville, IL. Memorials may be given to the Shelbyville Manor Activity Fund or Fourth Street United Methodist Church.
Ed was born on February 28, 1932 in Shelbyville, IL, the son of Albert E. and Helen Elsie (Gifford) Henne. He graduated from Shelbyville High School in the Class of 1950. Ed then served in the U.S. Army and was a veteran of the Korean War. He began working for the Shelbyville School System in their maintenance department. He then worked for the State of Illinois as a license inspector for Secretary of State, Paul Powell. Ed then started a career with the U. S. Army Corps of Engineers that spanned 30 years and retired as a contracting inspector. He was one of the original six that established the Shelby County Rescue Squad. Ed was a loyal blood donor for the American Red Cross and enjoyed repairing and refurbishing player pianos. He was a member of the Fourth Street United Methodist Church, VFW Post #4829, Roy Vanderpool American Legion Post #81 and Moose Lodge #1294 all in Shelbyville. He married Sandra Lee "Sandy" Martz on March 31, 1955.
He is survived by his wife, Sandy; daughter, Debbie Martz (Jeff) of Shelbyville, IL; son, Scott Henne (Joni Baldwin) of Shelbyville, IL; grandchildren, Jeremy Beck (Kellie) of Shelbyville, Woody Henne of Shelbyville, and Jessica Meredith (Ben Stevens) of Bloomington; and great grandchildren, Tyler Beck of Shelbyville and Tegan Beck of Shelbyville.
He was preceded in death by his parents; and four sisters, Geneva Henne, Gladys Henne, Laura Henne and Edna Stokes.
Send condolences at www.howeandyockey.com
Published on December 12, 2019
To plant a tree in memory of Edward A. Henne, Jr., please visit Tribute Store.

Plant a tree in memory
of Edward

A place to share condolences and memories.
The guestbook expires on March 11, 2020.

Sam pasquale
So sorry to hear of Ed's passing. He will be greatly missed. Condlencescto the family.
Judy Jesse Bily
I am so very sorry to hear of the passing of Ed. Prayers for comfort to you all during this very difficult time.
View all