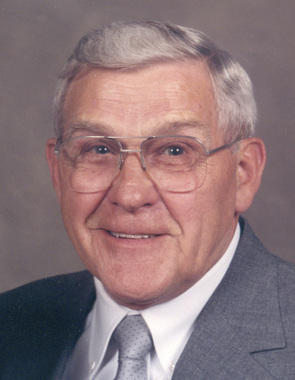 William K. "Bill" Cutler, 94, of Rockford, IL, formerly of Lakewood and Shelbyville, IL, passed away at 6:20 p.m. Friday, February 7, 2020 after a brief illness.
Funeral services will be held at 12:00 p.m. on Saturday, February 15, 2020 in Howe and Yockey Funeral Home, Shelbyville, IL with Rev. William T. Dahlberg officiating. Visitation will be from 11:00 a.m. - 12:00 p.m. on Saturday in the funeral home. Burial will be in Glenwood Cemetery with military rites by the Clarence Bixler American Legion Post #409 of Findlay, IL. Memorials may be given to the Salem Lutheran Church Music Department, 1629 S. Sixth St., Rockford, IL 61104.
Bill was born on March 14, 1925 in his family's home in Lakewood, IL, the son of Robert Lincoln and Bessie Mary (Christy) Cutler. Bill graduated from Lakewood High School in Lakewood, Illinois. Following high school, he began working nationwide as an apprentice surveyor. His training was suspended so that he could enter into service for his country. He fought in all five major campaigns on the European front with the Army's 195 Field Artillery during World War II. He married Opal B. Higginbotham on November 19, 1947 at the First United Methodist Church in Shelbyville, IL.
Bill and his wife Opal owned and managed the Hilltop Restaurant in Potosi, WI. Bill worked for the Sundstrand Corporation in Rockford until his retirement. As a member of Salem Lutheran Church in Rockford, IL, he was active in the 3 M's, was an usher, and enjoyed time with the Men's Group. Bill and Opal were very involved in the Sons of Norway, planning and hosting ethnic dinners. He was also a member of the Masonic Lodge of Cowden, IL, where he was recognized as being a 50 year member. Bill also was a member of the Order of the Eastern Star where he held many chairs including the Worthy Patron. He was also a member of the DAV, as a disabled American Veteran. As an officer, he served the members of UAW 592.
He loved his family and they were his world. He enjoyed spending time with his grandchildren, great grandchildren, and great great granddaughter. He enjoyed fishing and camping, bird watching, bike riding, wood working, golf, traveling, and volunteering at his great granddaughter's school. Bill enjoyed the many winters he and Opal spent in Florida.
Bill is survived by his daughters, Jacqueline E. (Richard) Jewell and Janet S. (Terry) Carter all of Rockford, IL; grandchildren, Theresa (John) Norwood, Rich (Lisa) Jewell, and Christina (Jerry) Rudolph all of Rockford, IL; great grandchildren, Katerina (Steven) Rockwell of Oak Creek, WI, Brittany (Senior Airman Nick) Gaudry of Colorado Springs, CO, and Grace Jewell of Rockford, IL, twins, Carter William and J.R. Rudolph, and David Rudolph all of Rockford, IL; great great grandchild, Savannah Rockwell of Oak Creek, WI; sisters, Eloise Robison of Shelbyville, IL and Joan Arthur of Findlay, IL; and numerous nieces and nephews.
Bill was preceded in death by his wife, Opal; his parents; brothers, James, Russell and Lindy Cutler; and sisters, Ruby Johnston and Opal Russell.
Special thanks to Nancy and also to the VA for all of their help on his journey home.
Send condolences at www.howeandyockey.com
Published on February 10, 2020
To send flowers to the family of William K. Cutler, please visit Tribute Store.

Send flowers
in memory of William

A place to share condolences and memories.
The guestbook expires on May 10, 2020.